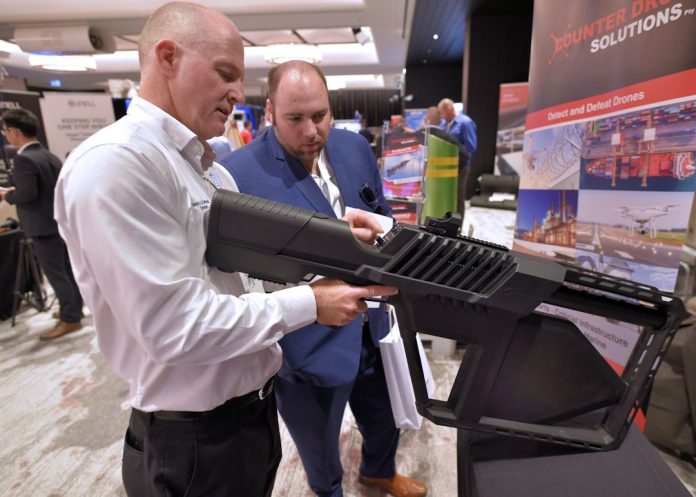 DRONESHIELD, the Australia-based drone countermeasures manufacturer, said it could assist authorities at Gatwick Airport in the UK, which was closed after industrial drone operators deliberately impinged on the airport’s flight space.

The incident has had a massive impact, with 500 flights cancelled and tens of thousands of passengers left stranded in the leadup to Christmas. The incident was serious, with 2 drones spotted flying over the airstrip – a drone strike has the potential to bring down a jetliner.

Oleg Vornik, chief executive of DroneShield, a company based in Sydney and Virginia in the United States, told SMH its technology “detects drones and can disable them or return them back to their operator – helping identify the perpetrators behind drone attacks”.

“Airports in particular are an incredibly legislated environment so, technically, absolutely yes, it can be quickly and successfully deployed and used,” Vornik said. “But there needs to be a process to deploy such technology which doesn’t exist today… so that kind of go-ahead from the relevant government bodies is what’s stopping this deployment.”

According to Vornik, drones had previously caused issues at Heathrow and Dubai airports but no airport was willing to be the first to install counter-drone technology. He said there were few other readily-available options to counter hostile drone use.

“We thought long and hard about about how to detect and how to defeat drones and there are not many options available, unfortunately,” he said.

Meanwhile, Britain’s Aviation Minister Baroness Sugg told the House of Lords the Home Office, the Ministry of Defence and the Department of Transport responsed to the Gatwick incident.

“We are working on the new technology which is available in order to ensure that such an incident doesn’t happen again,” Sugg said.

Prime Minister Theresa May said the perpetrators could face up to 5 years in prison.

“We’ve already passed legislation in relation to the use of drones – the activity that we’ve seen is illegal and those who are caught endangering aircraft can face up to 5 years in prison,” she said.