BRS AISight: The Age Of Reason 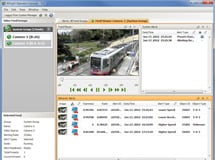 Perhaps the neatest thing about AISight, and I should point out here that I did not see the system running live but viewed multiple situational demos, is its ease of installation and setup.
Once the software has been started, it connects to a video network and begins to monitor the environment and activities going on in each assigned camera view – up to 30 inputs per server. Each of the camera views is stored as a separate memory. Elements that are always present in the environment become part of the recognised background of a scene.
Meanwhile, objects that enter the field of view are analyzed based on appearance, classification and interaction within its environment and other objects. This classification is important. Objects might be adjudged cars, trucks, humans, pets, birds.
As BRS explains it, the newly set up AISight software analyzes the structures, sizes, shapes, locations, velocities, accelerations, paths of objects and other characteristics of all objects within the scene and forms memories about them over a few days. It also records timestamps for these events and remembers during what times of day or days of the week events most frequently occur.
The more objects and behaviors are observed, the more weight these memories are given. The less frequently the system has observed an event in the past, the weaker its memory will be about the event and the more unusual it will deem a particularly uncommon activity. This might include a human figure on a runway or freeway, or a car on a railway track.
Unusual activity is immediately reported to security personnel to enable a proactive response to potential threats, but normal activity is ignored. And even when AISight has learned to ignore certain activities, it can still be told to alert security personnel of those activities regardless of how often they occur, if needed.
Because of its ability to learn, remember, and slowly but never entirely forget, AISight’s ability to provide currently relevant, accurate alerts evolves alongside the environment. It adapts to moving vegetation, lighting changes, repositioning of furniture, weather patterns, and myriad of other environmental aspects that challenge rules-based video analytic systems.

AISight has a range of monitoring capabilities that include things like classification anomalies. In such cases AISight recognizes when subject types match no known pattern of appearance/properties and issues an alert to that effect. The system can also report on position-based activities and motion. It does this by learning to recognize where it is common for things to appear, disappear, enter, exit, stop, start, turn, move quickly/slowly, accelerate quickly/slowly. AISight uses spatial memories (position-based maps) to recognize anomalies for behaviors that violate the learned patterns regardless of where they occur in the scene.
The system also uses its temporal (time-based) memories to issue alerts on anomalies for behaviors that violate the learned patterns based on time-based maps. This allows for normal activity that occurs on one day of the week, but never on another, to be tracked and reported. Importantly AISight achieves autonomous maturity recognition – AISight determines on its own when it has achieved sufficient scene knowledge and then begins alerts by itself.
While there aren’t any systems installed in Australia yet, there are plenty in the US, including a system that tracks 150 objects and activities at 12 MTA train stations in San Francisco. Its capabilities includes spotting unusual loitering, detecting bags left behind or people crossing the tracks.
According to public records, the system is also being installed at the World Trade Centre and is the system of choice for the safe city surveillance installation in Houston Texas. Other successful applications include port security in Louisiana and water treatment plants in El Paso. Ray Davis says AISight is the revolution the market has been waiting for.
“It has no false alarms and it catches the bad guy every time,” he says. “We can even catch behaviour leading up to a crime, whether it be in the minutes leading up to a car theft or the days leading up to a bank robbery.”
I think it’s fair to say that the entire video surveillance market would love to see a video analytics solution that works – a solution that energized our huge investment in CCTV. Whether AISight is used to handle all the cameras on a high security site or deployed to sharpen the reflexes of a selection of key camera views on a less secure sites, there’s no doubt every security department would love to have this technology at their side.

“Rosetta translates each frame of video into a language – a language the computer understands. We then pass that language to an artificial neural network that simulates a human brain and what this language does is identify every facet of each video frame and send it to a computer”