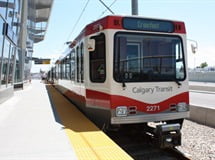 BACK in 1981, the city of Calgary in Alberta, Canada opened the first leg of the Light Rail Transit (LRT) line for the city’s visitors and residents. Today, the LRT has more than doubled the number of stations, added two additional legs, and boasts around 95 million passengers per year.
The system is now commonly referred to as the “CTrain” and includes 38 stations connecting 46 km of track. The three legs operate on 7th Avenue through the city’s downtown area, and the resulting ten-station stretch in this high-density area is a Free Fare Zone that reduces transportation congestion in the heart of the city.
When the CTrain system was first built, a CCTV system was installed comprising a matrix of analog cameras transmitting analogue video to tapes, and eventually DVRs, which processed and archived the footage. In addition to being technologically outdated and providing a limited user interface, Calgary recently determined the system to be at end-of-life, and concerns of system failure caused key decision makers to seek a new solution.
There are inherent challenges to monitoring and providing safe passage to CTrain’s customers. A transit environment is necessarily fast-paced and must aim to ensure security without hindering a timely travel experience. In addition, the disparate location of various stations requires a system that can efficiently pipe data to a single position to enable effective monitoring and evaluation of the CTrain system as a whole.

In searching for a suitable replacement for the CTrain’s video surveillance system, several qualities were paramount. Calgary needed an open-platform system to maximize flexibility under strict procurement models, as well as a mature and proven piece of software that could easily integrate with their large monitor wall and run across multiple work stations. The CTrain also required a multitude of software configuration options and the ability to easily scale the system as needed based on the addition of new transit stations to the CTrain’s constantly growing lines.
An IP solution was deemed most suitable, providing reduced infrastructure costs for a system that would be spread across a number of physical locations (i.e., stations), as well as increased system security. An added benefit would be the creation of a robust network. This would not only house the security platform, but also facilitate an evolution in the transit organization. The network would provide a technologically advanced backbone on which all aspects of the CTrain’s management could rely and interplay smoothly.
Calgary issued an RFP (request for proposal) to learn about the options available. After evaluating Calgary’s needs and the difficulties faced in a transit environment, Contava, a Genetec Unified Elite security integrator, submitted a bid based on Genetec’s Omnicast video surveillance platform. Following careful evaluations, Calgary selected Contava to design and implement their new security solution.

Once the project was approved, the CTrain’s Omnicast system was designed, the stations were retrofitted and cameras were installed all inside of 9 months.
“Given the solution delivered in this short timeline, this has to be the most successful security project of all time,” remarked David Sime, director of operations at Contava.
Omnicast was installed as a stand-alone video surveillance system within the Security Center, Genetec’s unified security platform to provide a seamless user interface with maximum expansion options, including potential for access control in the future.

“These two factors – scalability for enterprise architecture and usability – combine to create a system that is not only perfectly fit for transit deployments, but is also simply the strongest video management platform available right now.”

At the sharp end, the CTrain system employs 471 Panasonic megapixel WV-NW502S cameras with vandal-proof domes, which are capable of H.264 recording. An additional 23 Panasonic WV-NW964 outdoor-rated PTZ (pan tilt zoom) cameras round out the arsenal. Panasonic WJ-GXE500 IP encoders with H.264 compression capabilities are used where needed, allowing Calgary to save funds by making use of existing analog cameras leftover from the previous solution. The system is hosted on Dell R510 and R410 servers, which allow for distributed archiving throughout the stations and offer a significant amount of recording capacity – 30 FPS (frames per second) for 30 days for the whole network.
In addition, the downtown City Hall Information Technology Data Center houses centralized failover archiving of video and redundant directories, and the core network layer itself is redundant and configured in multiple ring architecture. While the CTrain is open for business, 3 operators monitor the system’s vast collection of camera feeds in real-time from a centralized location that features a two by nine array of 46-inch bezel-less Mitsubishi VS-L46SM70U LCD monitors.
System data can also be accessed from the OCC (Operations Control Centre) in Calgary’s public safety office to track operators, and law enforcement can use this facility to request surveillance data for investigations. The system also has the capacity to provide offsite video access to law enforcement for increased response time, and privacy impact assessments are being conducted to investigate viability of this option. Citrix access is set up to allow remote maintenance of the system.
“One of the major advantages of choosing Omnicast is its flexibility,” says Colin Adderley, project manager and engineer at the City of Calgary for the CCTV system.
“The flexibility in architectural design of the system has allowed us to minimize single points of failure along all portions of the system. And the open architecture allows us to use our ‘flavour of the day’ cameras to accommodate vendor competition through different product life cycles. Plus, the whole system is cheaper on a per-camera basis so we can maximize our coverage with allocated funds.”
The Omnicast platform integrates with a number of other systems to streamline the CTrain’s operations. Active Directory is integrated to efficiently manage administration and organization of user profiles; SNMP (simple network management protocol) monitoring is also enabled, to provide an extra layer of reliability by alerting both operators and Contava if any network connected device experiences a fault or performance issue.
Most importantly, Omnicast has been integrated with the CTrain’s SCADA (supervisory control and data acquisition) system. The SCADA system controls operator interaction with various events, often mechanical, including movement of elevators and escalators, and response to station help phones. Integrating with Omnicast means that the SCADA system will drive alerts or requests via a serial to digital interface to the videowall and operator. Omnicast will also respond to the SCADA system confirming video alerts have been received, and allowing the operator to remotely control systems via SCADA. This process is required by policy for civilian safety prior to allowing action, for example, movement of an elevator.
Selecting Omnicast for their video surveillance needs has provided Calgary’s CTrain with numerous advantages over their previous system.
“It’s like apples and oranges comparing this solution to the old system – you could say all of the features are new to the LRT,” said Sime.
Since training has been completed, the platform’s overall usability has proven priceless in assisting the 3 operators with managing such a large system, which is used primarily to monitor public access to the space in real-time, as well as documenting post-incident investigations when necessary.
The map interface also allows operators to quickly and easily identify where cameras are located, without cross-referencing a complicated and voluminous data sheet. Video analytics have also been integrated with the system, enabling automatic alarming to aid in monitoring such a large volume of feeds and to fine tune usage of the High-Definition video streams. Additional analytics, such as unauthorized access alarms, are under consideration for future deployment.

Since transitioning from the static and non-responsive analog system, the CTrain has been able to find strategy “in just about every direction, which is a luxury we did not have before,” says Mr. Adderley.
“This, plus configurability and flexibility of the system, has transformed our processes for the better, from hardware procurement to consolidation to granular permissions configuration to performance measurements.”
There has been extremely positive feedback to the high-quality of the images recorded by the system, as well as the ease of information retrieval. This has allowed images to be employed for operational observations, such as train arrival times or evaluating whether interlocks are working.
Auxiliary strategies aside, however, the biggest win for the CTrain’s new system is the improved security it has provided. Increased image resolution has been integral in assisting with the identification of individuals who have committed crimes, and the highly navigable system allows the images to be served up to law enforcement in no time. A platform that yields this type of reliability, certainty and response time is priceless to an organization like Calgary’s transit system. It provides a sense of security to the public who see the effects of an immediately responsive system and have confidence that the organization is equipped to do its utmost to keep them safe.
“We have seen large-scale Genetec deployments prove successful in bustling international airports and massive shopping malls, ensuring that the platform is proven and can scale well. Moreover, in our opinion, Genetec delivers this platform using the best interface for operators to view and manage live and recorded video,” says Sime.
“These two factors – scalability for enterprise architecture and usability – combine to create a system that is not only perfectly fit for transit deployments, but is also simply the strongest video management platform available right now.”

“At the sharp end, the CTrain system employs 471 Panasonic megapixel WV-NW502S cameras with vandal-proof domes, which are capable of H.264 recording. An additional 23 Panasonic WV-NW964 outdoor-rated PTZ (pan tilt zoom) cameras round out the arsenal.”