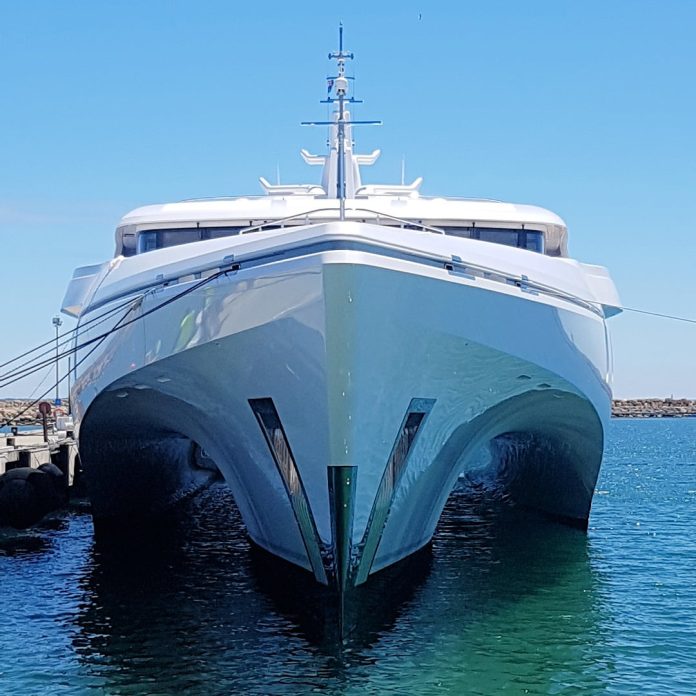 Mediatek has installed Dahua CCTV cameras and NVRs supplied by Seadan Security & Electronics aboard White Rabbit, the largest super yacht ever built in Australia. The surveillance solution incorporates fixed dome and PTZ cameras managed on the bridge of the vessel using a joystick keypad.

PERTH security integrator Mediatek has just completed installing a video surveillance solution aboard the new super yacht White Rabbit, a diesel-electric trimaran that is 84 metres in length, has a beam of 19.6 metres and a displacement of 3000 tonnes. The yacht was custom designed for its owner by Sam Sorgiovanni and built by Echo Yachts in Perth.

Part of the fitout included a video surveillance solution to enhance safety and security aboard White Rabbit. A particular challenge of the application was the harsh marine environment into which components would be installed. Cameras are exposed to salty air, spray and high winds, as well as vibration and wave movement. The ambient environment is also subject to extreme low light, making careful choice of equipment important.

As this project required a complete bespoke solution, Mediatek approached the team at Seadan Security & Electronics’ Balcatta branch for their additional expertise and advice. Working in partnership, both Mediatek and Seadan Security were able to formulate a complete solution ensuring that each challenge was addressed. The team were convinced that Dahua had the quality and specialist CCTV equipment available to meet the project’s challenging requirements.

A key selection was the integration of several of Dahua’s stainless steel 30x anti-corrosion Starlight PTZs (DH-SD60230U-HNI-SL) into a Dahua 5000 Series Pro Series NVR managed by an NKB-1000 joystick keyboard and integrated into the Control 4 automation platform aboard White Rabbit. As well as a powerful optical zoom and an anti-corrosion design including potted electronics, this camera features a 1/2.8-inch Exmor R CMOS sensor. The camera uses the H.265 video compression standard to improve encoding efficiency while preserving high-quality video.

Additional features of the camera include Dahua’s Starlight technology, which is ideal for challenging low-light applications. The cameras use a set of optical features to balance light throughout the scene, resulting in clear images in dark environments. True WDR (120 dB) allows the camera to deliver colour balanced image streams when faced with strong backlight.

Another valuable feature of this camera for White Rabbit was an auto-tracking feature, which controls the pan/tilt/zoom actions of the camera to automatically track an object in motion to keep it in the scene. The tracking action can be triggered manually or automatically by defined rules.

John Diamond of Mediatek said it was a privilege to work on such landmark project.

“The fore and aft Dahua PTZs provide great visibility in all lighting conditions which was what we were after for this project,” said Mediatek’s Jon Diamond. “The captain can keep an eye on things as he also has a further 19 cameras around the vessel that he can view.

“Through Control4, certain cameras are also available for the guests to view on the 75-inch TVs on board. All other cameras were also installed from above the ceiling tiles so that only the domes are visible from underneath, maintaining the aesthetics of the vessel by keeping the profile as minimal as possible.

“The installation was certainly was a challenge that was made easier with the help of Jordan De Sales and Ken Johnson from Echo, who were a pleasure to work with on this beautiful yacht,” Diamond said. “Mediatek’s installation team included Phil Griffin, Alyosha Wetton and Ben Hammond and their work was outstanding.

“We are very happy with the result and appreciate the support of the Seadan Security team, which has been there from the start and worked hard to ensure smooth installation and operation of the Dahua CCTV equipment.”