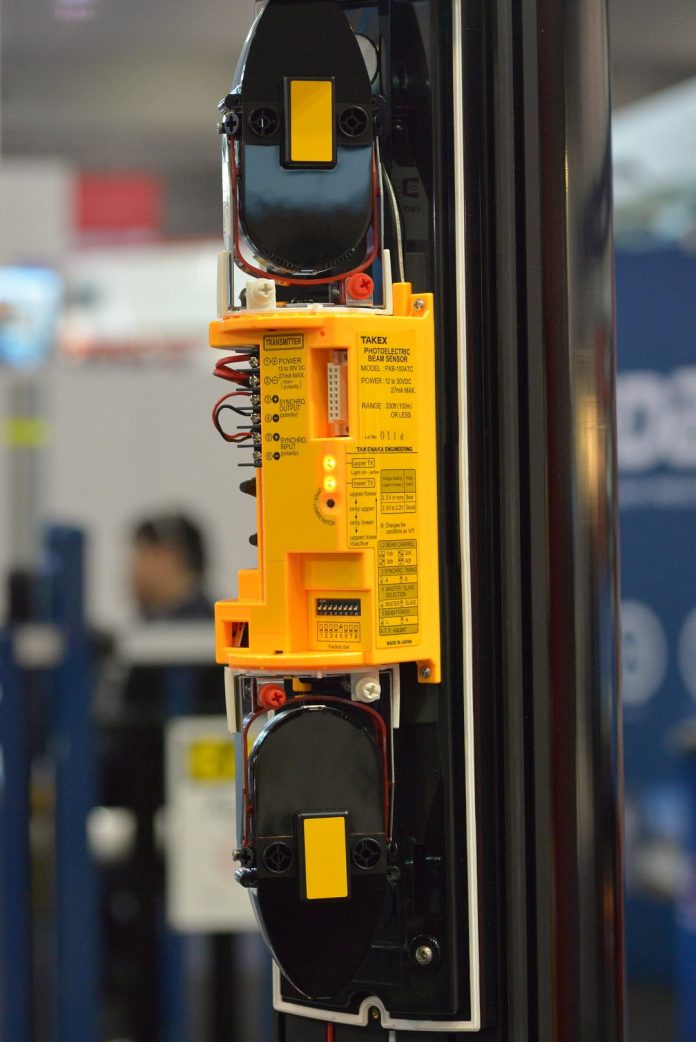 INFRARED photoelectric beams are an under-rated perimeter detection technology. They combine comparatively low cost and are not vulnerable to slow-rate-of-change attacks when compared with rivals like microwave and VMD.

Another big advantage of the technology is its modest requirement for real estate. PE beams are narrow, they’re not propagating large signals through open space that might spill into neighbouring areas and generate false alarms. They are also long range, with these units offering detection zones of 100 metres.
Takex photoelectric beams are also impervious to direct sunlight, condensation and plant movement in the target area, which can pose problems for less capable PE technologies. Takex photoelectric beam technology is so well regarded by the industry many major manufacturers OEM it.
These latest PXB-100ATC PE beams from Takex offer all the typical benefits of IR applications with some serious improvements to catch performance. They’re also hugely stackable, allowing them to protect a whole range of boundaries and facilities with impenetrable walls of detection. 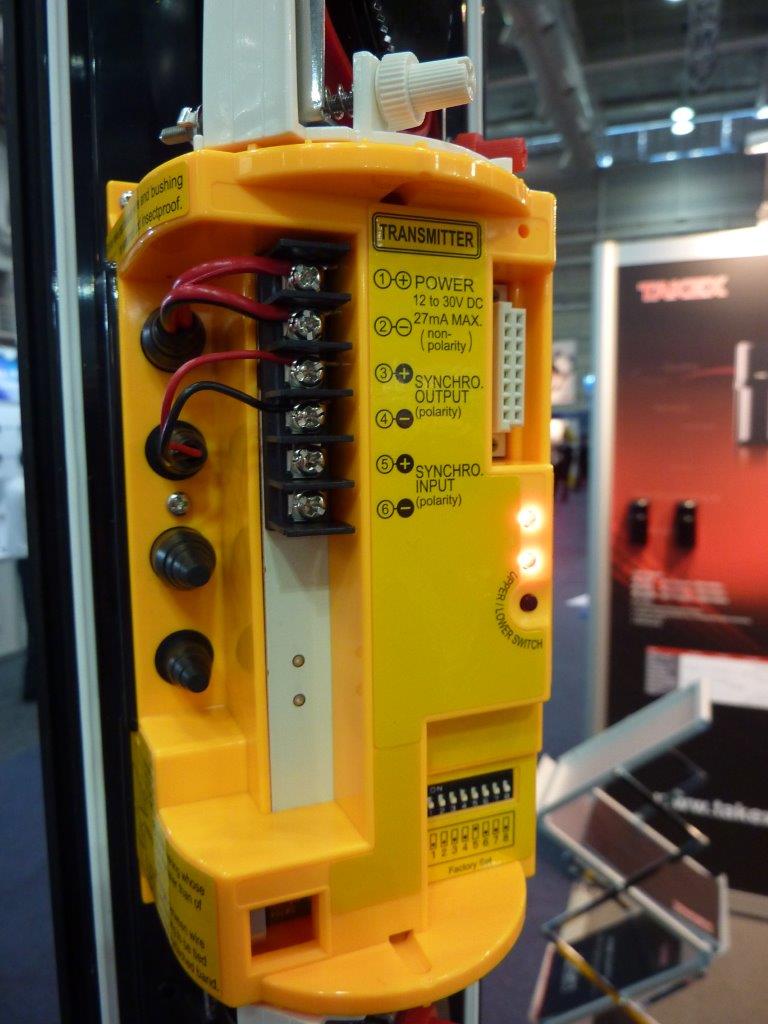 According to Tom Kinkade, national sales manager, Takex Australia, one of the issues with all PE beams over the years is that you are limited in how high you can stack them.
“In the past it’s always been dangerous to transmit neighbouring channels in the same direction or channels of the same frequency because of crosstalk,” he explains.
“Traditionally they’d be installed transmitter, receiver, transmitter, receiver and you were limited to about 4 high and could not have linear zones because channel 1 here might hit channel 1 over there.
“With this new PXB-100ATC series of beams there are a couple of benefits. First, they are synchronised by a time division system. In the past units 1 and 3 might have gone in one direction and units 3 and 4 might have gone in the other.
“Now the top units are channel 1A and channel 1B – on same frequency – and with the other units it’s the same. So we have a bank of 4 sets and we are able to have another bank of 4 sets above it and another bank of 4 sets above that and then one more above those – we can go to 16 units high.”
According to Kinkade, another difference with the new beams relates to the setup and function of the anti-crawl beams.
“What we used to have was anti-crawl beams with quad beams above them. This was the traditional way of doing it with PE beams. The weak point with that is that there was a window between them and it was possible to get through that window using a folding ladder.
“With the PXB-100ATC we have closed that window and we can stack a whole lot higher. And with this new set of beams not only do you have the time division, you also have an upper and a lower signal – designated AND, OR – and there are separate outputs for those as well as a different response time of half a second.”
As Kinkade explains, the idea is that you can’t crawl through a beam perimeter in half a second. 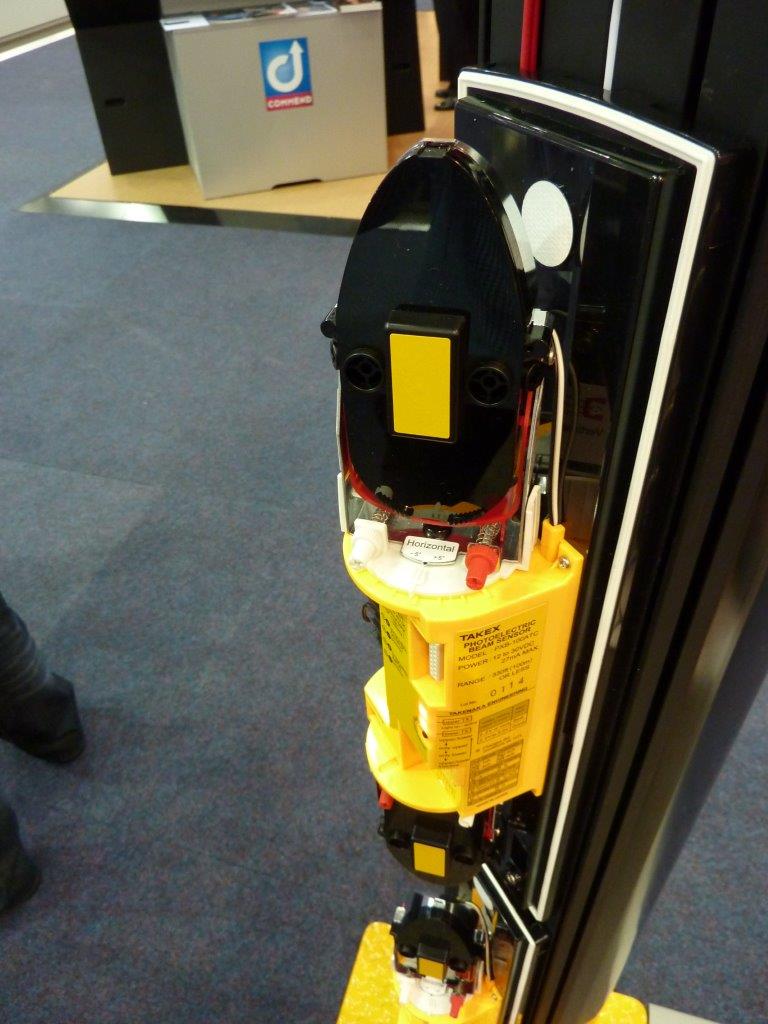 The OR Gate and AND Gate response to intrusions allows the sensors to offer excellent discrimination between real alarm events and the movement of wildlife.
The OR response is initiated when an opaque object of 216mm in height passes through the detection area at ground level and either the lower or upper beams are broken. When an OR detection occurs, beam interruption time is determined by the settings applied during calibration. The adjustable response times for OR detection are 0.1, 0.2, 0.3 & 0.5 seconds.
The 4 configurable OR detection response times ensure that small animals such as birds and rats can pass through the detection area undetected, but attempts by humans to crawl through a portion of the detection area are always detected and reported to the alarm controller.
Meanwhile, the AND response is initiated when an opaque object of 513mm in height passes through the detection area at ground level and both lower and upper beams are broken simultaneously. When an AND detection occurs, beam interruption time reduces to 0.05 seconds ensuring that large objects cannot pass through the detection area undetected.
During an AND alarm condition, both the AT & HF output are engaged to communicate a full alarm. The size and speed processing reduces the likelihood of nuisance alarms caused by birds or debris flying through the detection area, while maximizing the catch performance of legitimate targets, like diving intruders.
Other features of this product include ±20 degree vertical adjustment, anti-mask & anti-cloak, alignment aids, a narrow envelope, dual output and response processing, advanced synchronisation and ingress protection. The units are IP65-rated and have a number of features designed to keep out insects, dust and water so that performance in the field is not compromised.
Meanwhile, the PXB-100ATC uses a sophisticated dual response and output system that has been designed to distinguish and allocate specific alarm responses based on the size and speed of target objects moving through the detection area.
Fact file
Features of the PXB-100ATC include:
* Independent control of upper and lower beams
* Choose between Synchro Quad and Anti-Crawl operation
* Separate outputs for crawl attempt and full beam break
* ±20 degree vertical / ±90 degree horizontal adjustment
* Vivid colour coded internal casings for easy visual alignment
* Integrated ‘sound check’ tone generator and ‘monitor output’
* Advanced synchronization – stack more TAKEX sensors than ever before
* IP65 housing
Linkedin
Facebook
Twitter
Email
Copy URL
Print
Previous article
Macquarie Uni’s Campus-Wide Alert System
Next article
Biometrics Held Back By Lack Of Expertise