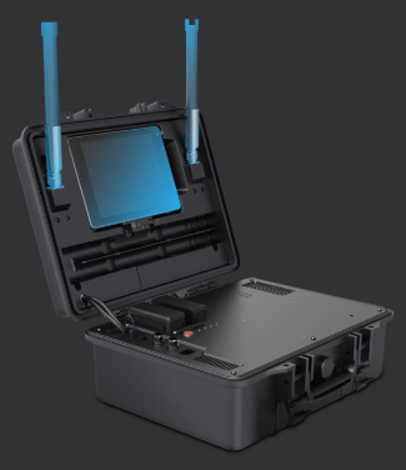 Gatwick Airport drone closure in April last year led to the disruption of 1000 flights, impacted on 140,000 passengers and cost airlines around $A65 million in lost earnings.

Gatwick also made the aviation and security communities acutely aware of the financial and safety risks posed by rogue drones. The use of Aeroscope was undertaken.

While the incident led to significant interest in drone detection technology from security and law enforcement personnel the challenges of developing a reliable solution to detect small targets in congested airspace made it difficult to create an effective detection strategy.

According to C.R. Kennedy’s Douglas Kennedy, the DJI Aeroscope solution is different from other drone detection solutions on the market.

“By being able to natively read the C2 (command and control) link from DJI drones, the Aeroscope has a major advantage over other drone detection systems,” Kennedy explains. “Importantly, DJI drones account for approximately 70-80 per cent of the drones (hobbyist and commercial) in the Australian market – that means the ability to detect these drones reliably is a huge advantage.”

“An identifier, such as a registration number, together with position information about the drone is transmitted from the drone and available to all receivers that are within a certain range (approximately 5km on a mobile unit, and 20km on a stationary management unit, depending on the installation environment),” Kennedy says.

“Authorised receivers of the transmission, who believe the drone’s operator is violating a regulation or engaged in unlawful acts, can thus investigate drone activity and react appropriately.”

Since its introduction into the international market back in 2017, CRK has sold and deployed over 60 Aeroscope systems across Australia, to customers such as police and law enforcement, government departments and corrective services.

Utilising existing relationships with both surveillance and UAV customers, CRK have been able to use their expertise in these fields to successfully deploy both mobile and stationary Aeroscope solutions into the field.

• Aeroscope uses the existing, in-built command-and-control link (C2 link) between the remote and the drone, or the video telemetry downlink, to transmit identification information directly to ground receivers.

• These links most often use existing radio frequencies in the 2.4GHz and 5.8GHz bands.

• The ground receivers decode the information, and send it to a screen terminal, making the Aeroscope system very easy to use.

• Drones appear on a map on the screen of the Aeroscope unit and a user can click on the drone graphic to reveal the following information:

There are 2 versions of Aeroscope, a stationary and a portable installation. The mobile version is run as a standalone system and can be run on either 240V or with the 2 included batteries for up to 2 hours of standalone operation in the field. This is perfect for fire fighters, police and military.

The stationary version comes in 2 varieties, the most popular being the G8 Stationary, which is designed for longer term or permanent installations to defend large sites, this version supports customization and construction according to the specific site and user demands to completely cover the surrounding airspace.

Under ideal conditions, the system can monitor a range of up to 50km in diameter and obtain key information from drones in as little as 2 seconds. Monitoring data can be integrated with users’ existing security systems to efficiently provide an integrated monitoring system.

This system also supports public cloud, private cloud, and local deployment, capable of meeting specific needs such as off-site monitoring and data segregation. Important to note – the monitoring range of the stationary unit is determined by the type of antennas installed.

“Aeroscope captures those drones using the existing C2 link; this means all DJI drones and those with a similar link (DJI flight controllers etc), will show up on the system,” says Kennedy. “Given DJI’s dominant market share, this accounts for at least 65-70 per cent of drone traffic.

“In the next few years, it is likely that a form of remote ID will be required to be adopted by drone manufacturers worldwide. DJI is working with all relevant authorities already to ensure Aeroscope can be upgraded to incorporate these additional IDs when they are implemented.”