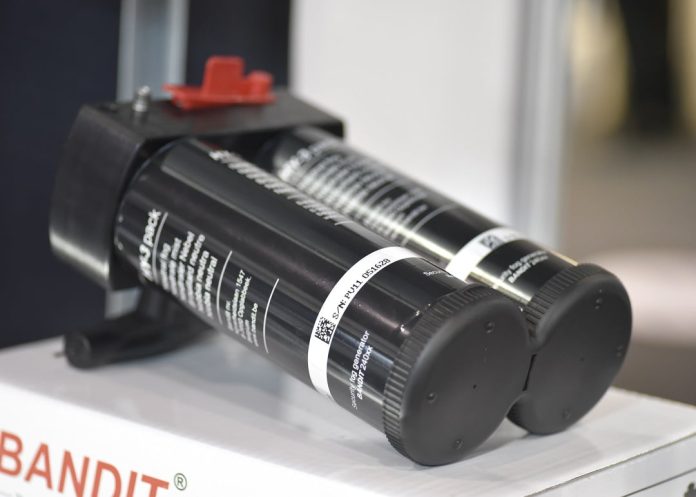 AT Security 2018 SEN got a demo of the Fog Bandit, a security fogging system that is designed to fill the protected space with a visually impenetrable fog, encouraging intruders to beat a retreat.

WE’VE been hearing about security fogging solutions for decades but never had a chance to experience them first hand until Security 2018 Expo, where we stood in a closed space of around 7 x 3 metres and witnessed the process of activation. The Fog Bandit unit activated was a standard twin-canister Bandit Fog Generator, which emits a cloud of propylene glycol in super quick time. While I had no absolute idea what to expect, time spent on the dance floor at Carmens at Miranda in the mid-1980s gave me a vague sense of the possibilities.

To measure the speed of the process, I set my camera to continuous low mode, planning to press the shutter and hold it down as soon as Fog Bandit was activated and keep it held down all the way through the demo. Continuous low mode with the Nikon d750 is 3 frames per second, which gives you a pretty clear idea of how quick the process was when you look at the consecutive images here. What happened? The Fog Bandit was activated and in less than 10 seconds the room was filled with an opaque mist – I couldn’t see my hand in front of my face and there were general outbursts of surprise from others in the demo at the completeness of coverage.

The fog reaches out from the unit in 3 plumes – there’s suddenly a point at which it completely fills the protected space. Listening to my recorder I can hear the shutter slapping away until, faced with a wall of white fog, the auto focus system decides to take its bucket and spade and go home. The process of the AFS quitting and complete disorientation on my part took less than 2 seconds. It was a bit like the experience of a general anaesthetic – just as you think of a humorous way to tell the surgical team their injection is working, everything goes blank. We all piled out of the demo tent into clear air with a genuine sense of relief.

Does Fog Bandit work? Yes, it works. There’s no chance an intrusion could continue once the Bandit activates and anyone exposed to the fog is going to turn around and try to find their way out of the protected space. There’s going to be no smashing up the place, or quickly snatching high value items. By the time an intruder realises what’s happening, they’ll be unable to see the space at all. Dissipation rates are relatively slow, so cool-headed intruders aren’t going to be able to just wait a couple of minutes for the air to clear and continue as planned. In any case, alerted by the activation of the alarm system (this activation is what drives Fog Bandit), police or security officers will be on their way.

Fog Bandit delivers 28 cubic metres of fog per second, pushing 6 metres in the first 2 seconds. A single unit can protect areas ranging from 50 to 500 cubic metres. Reaction time from activation is 0.1 of a second to deliver fog at full power. The attraction of this fast delivery is that an intruder opens the door to the protected area and is immediately hit by the activation process, which is extremely hard to ignore and impossible to circumvent.

Solid state electronics and robust, high quality casing and components ensure reliability, while a continuous self-diagnostic process reports system status changes by email or text, or to a management system. Fog Bandit has low maintenance and running costs – a clean filled and hermetically sealed fluid cartridge has a 4-year no-maintenance life span and engineer call-outs are not required after every activation because each cartridge can deliver up to 25 activations, depending on the size of the space being protected. In terms of overall lifespan, a Fog Bandit unit has a lifespan of 15 years, which is exceptionally good, compared to other electronic security solutions.

According to the Fog Bandit people, the eye-to-object visibility of the solution is 30cm post activation but it seems much less than that. I put my hand in front of my face and could not see it at a couple of centimetres. Whether or not the compact demo space contributing to this performance is unclear, but the potential is there for very high-density coverage. Important, too, the fog is harmless and safe in any environment. However, you will need to create procedures so staff know how to respond in the event of an activation. You also need to establish whether or not any security fogging solution will activate smoke sensors in the area – heat, flame or discerning smoke detection systems like VESDA should be fine, but older smoke sensors may activate.

If you need proactive protection of high value or sensitive items that combines low cost with the capacity to stop any attempted intrusion in its tracks, Fog Bandit might just be the solution for you.

* Protects an entire room in just a few seconds
* Delivers 28 cubic metres of fog per second
* Projects the fog 6 metres in the first 2 seconds alone
* One unit can protect areas ranging from 50 to 500 cubic metres
* Reaction time just 0.1 of a second to deliver fog at full power
* Eye to object visibility is less than 30cm post activation
* Fog is completely harmless and safe to use in any environment
* Solid state electronics and robust, high quality casing and components
* Continuous self-diagnostics and reporting
* Long life and low running costs.