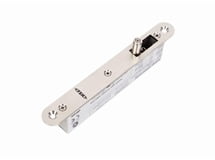 POWER draw in access control systems isn’t something installers and end users think about but it’s something that needs to be taken into account. A large access control solution has a considerable collective power draw, 24 hours a day and 365 days a year. This is because electric strikes and mag locks must be constantly powered to retain a seal.
In developing its EcoLine, FSH directly targets sleeping power draw, slashing it by up to 5 times. When extrapolated across several hundred or several thousand access controlled doors, the ongoing savings provided by these locks over their long lifetimes are likely to pay for their purchase.
“We’ve put a lot of effort into developing this range and it really does make a difference to the power draw of an entire access control system,” says FSH MD, Trevor Mackle.
“For instance a typical constant duty electric strike might draw anything from 175mA to 250mA all day, every day. In comparison, our pre-load EcoStrike FES90M-P which is equipped with high duty capacitors – super caps – draws no more than 15mA in sleep mode using 12V DC. That’s nothing.”
Important to bear in mind, EcoStrike doesn’t compromise its security potential to achieve this low current draw. It’s a serious security solution with a maximum holding strength of up to 1370kg and resistance to pre-load/side load of 35kg.
Something else that’s interesting about this lock is that it doesn’t use a solenoid. According to Mackle, FSH has gone away from using solenoids. Instead EcoStrike is a motor-driven lock so it can’t be defeated by hammering.
This motorised strike has been durability tested to 1.5 million cycles (I saw the lock on the test jig in FSH’s new office). Also neat, the lock has multi-voltage capability and can handle anything from 10-30V DC. EcoStrike is weather resistant, is fully monitored including a reed switch for the door position and is pre-drilled for extension lips.
Sleep Mode Current less than 15Ma@12VDC
The next unit in the lineup is EcoLock VE1260, a high security motorised drop bolt which also features pre-load/side load resistance capability of 35kg. According to Mackle, this locking device is similar to the TRIMEC V-Lock but he says it’s significantly advanced.
The EcoLock VE1260 is durability tested to 900,000 cycles and also has that multi-voltage capability. In this case, it can handle anything from 11-30VDC. There’s a holding strength of 1000kg, a 5-year warranty, full monitoring, including a reed switch for door position, and, last but not least, there’s an outstanding sleep mode current draw of less than 15mA@12V DC. The device also has optional locking plates to pull in doors with misalignment of up to 12mm.
Next in the EcoLine family is EcoMag ECO5700HS. This is a high security power saving electromagnetic locking device with a compact design allowing it to operate with hinged doors. The key qualities of this lock are its excellent holding force in both sleep and alarm mode and it’s extremely low current draw in sleep mode.
Holding force in alarm mode is 680kg using 240mA @ 24VDC. Meanwhile, holding force in sleep mode is a very good 340kg at the tiny consumption of 70mA @ 24VDC. Other features include door and lock status monitoring sensor (DSS&LSS), early warning signal output and local alarm buzzer (EW).
There’s a multi voltage 10-26VDC low power consumption, exit switch delay function and a long distance light panel, which allows security staff to check door status from a distance during foot patrols. This operational awareness is clever thinking from FSH.
“The way ECO5700HS works is that holding force is a strong 340kg in sleep mode but as soon as load is applied to the door and the lock goes into alarm mode, the holding force jumps up to an excellent 680kg,” Mackle explains.
The last lock in the EcoLine is as the EcoMag ECO3500HS, which incorporates all the strong features of the ECO5700 in a smaller form factor. There’s door and lock status monitoring sensor, early warning signal output, exit switch delay and long distance light panel, as well as a local alarm buzzer.
The 3500 Eco Mag has up to 100kg of holding force in sleep mode at 60mA @24V DC but wake the lock up by applying pressure to the door and the holding force spikes to a solid 280kg.