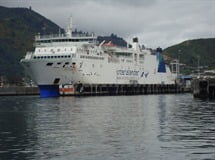 INTERISLANDER LINE’s vessels travel Cook Strait between the North and South Islands of New Zealand, one of the most spectacular cruises in the world. The 92km journey between Wellington and Picton is one of New Zealand’s most iconic tourist experiences as well as being a vital piece of New Zealand’s infrastructure.
The service operates three ships Arahura, Aratere, and Kaitaki, carrying passengers and their vehicles, as well as rail and commercial freight. Taking a vehicle on an Interislander ferry is as simple as parking – just drive on and drive off one of 11 sailings a day.
This busy service carries around 1 million passengers and 230,000 vehicles every year and it goes without saying that the safety and security of passengers, luggage and staff at the ferry terminals at Wellington and Picton, is of the utmost importance.
Given this, a sophisticated and efficient video surveillance system is paramount for Interislander Line and up until recently, the operation was making do with an aged analogue system, which had poor image quality and was becoming slow and ineffective.
Network Imaging Solutions (NIS) was chosen to lead Interislander’s CCTV system overhaul. Partnering with Teltrac Communications, John Hurford from NIS designed a Mobotix installation that far exceeded the expectations of this important public safety system.
NIS has been a security solutions provider since 2004, and differs from the traditional distribution model. They are actively hands-on and have the IT experience to assist integrators install and set up systems to the end user level. This experience and capability made the company an ideal choice to handle the Interislander system.
“Upgrading to a new MOBOTIX IP system gave Interislander far more control over its security requirements and increased flexibility, while remaining cost-effective,” explains NIS’ John Hurford.
Harsh environmental conditions create challenges for any security system at these sites
“We had to deal with below freezing temperatures, with Picton and Wellington Ferry Terminals situated at sea level and subject to severe gales, rain, hail and temperature variations. A very corrosive salt-laden atmosphere also makes things difficult.”

NIS designed and implemented a surveillance system comprising MOBOTIX Q24M, D12D, M24M, D24M and M12D cameras. In total over 30 cameras have been installed with flexibility to expand at any time in the future.
Ian Gilbert, security manager at Interislander, praised the durability of the MOBOTIX cameras and their ability to overcome the harsh environmental conditions.
“The production of custom stainless steel brackets as mounts meant we were able to protect cameras where appropriate from the difficult conditions at the site,” he says.
“Using these brackets, combined with the Mobotix camera’s built-in protective housing, the system is secure from the elements.
“The salt in the atmosphere where Interislander operates was also a big issue we had heading into this project, but the self-cleaning coating on the Mobotix cameras made short work of this.”

The Mobotix system has provided a durable, efficient and powerful surveillance system for Interislander. We’ve been able to reduce the number of lost item claims while ensuring our passengers, luggage, equipment and staff are safer than ever before.

Use of an array of different Mobotix cameras, all offer high resolution megapixel images, gives Interislander a solution that offers a lot of performance for its money. Of these, the Q24M gives a panoramic 360-degree fisheye view and offers continuous digital pan, tilt and zoom. This camera has 3MP at 20ips as well as progressive scan, vandal resistance and onboard storage.
Meanwhile, the D24M gives 90-degree views along with onboard storage, rugged weatherproof case, digital PTZ and high resolution images. Interislander is also using the D12M, which gives 2 separate images for day/night operation. One of the most rugged CCTV cameras ever built, this unit is weatherproof, offers high resolution images and is extremely capable.

Mobotix’ MxControlCenter (MxCC) software is used to manage the solution at Interislander in conjunction with Mobotix hardware. MxCC is monitored live in both the manager’s office and by operations staff who have a dedicated PC to view the cameras. This powerful software package bundled with the Mobotix hardware free, allows for both live feeds and for archiving.
“The ongoing updates to the software license without additional payments made MxControlCenter a logical choice for our security software,” says Gilbert.
“Additionally, the software is extremely easy to use and powerful, fulfilling all our needs.”
According to Gilbert, the Mobotix installation has already been a tremendous success.
“The Mobotix system has provided a durable, efficient and powerful surveillance system for Interislander. We’ve been able to reduce the number of lost item claims while ensuring our passengers, luggage, equipment and staff are safer than ever before.”
The system has replaced an aged analogue system, providing increased efficiency, higher resolution video footage, and increased levels of security for all local and international travellers on the Interislander service.

The salt in the atmosphere where Interislander operates was also a big issue we had heading into this project, but the self-cleaning coating on the MOBOTIX cameras made short work of this.