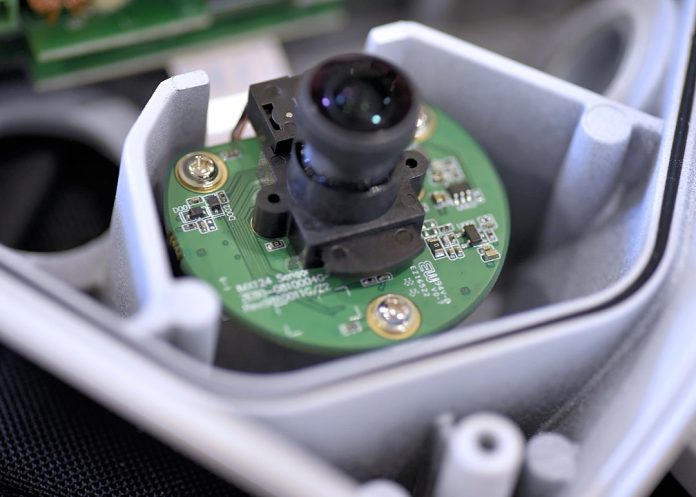 PELCO Sarix IBD high security corner camera is a striking piece of kit from the moment you wiggle it out of the box, thanks to an angular lozenge shape designed to make it virtually impossible to get leverage on. As well as being IP66 rated against water and dust, the Sarix corner camera is rated IK10+ against vandalism, giving impact resistance of up to 50 joules.

It has die-cast aluminium construction, NEMA 4X rating and weighs 1.15kg. The hand-feel is good and the build quality leaves nothing to be desired. Perhaps the only thing I’d like more of in the physical spec is space to run the Cat cable – you simply must shuck the housing and even then, the acute angle at which the cable approaches the port means it’s a squeeze.

Designed for use in protected, high-risk areas like prisons, the camera features an antiligature, no-grip design without anchor points, and fits flush to corners protecting against attempts to detach or disable the camera. Despite sitting flush to a single corner, the camera’s 45-degree angled position allows it to capture video for an entire 10 by 10 m room, including directly below the camera.

The camera has a progressive scan 1/2.8-inch CMOS sensor delivering 2048 x 1536 pixels. The F2.1 aperture fixed 1.8mm lens gives a horizonal angle of view of 120 degrees and a vertical angle of view of 90 degrees, with an electronic shutter. WDR is 75dB, white balance between 2000-10,000K, 3D Digital Noise Reduction Yes (ON/OFF selectable), a signal-to-noise ratio of ±50dB, a mechanical IR cut filter that’s auto-selectable and an IR range of 10 metres.

There are 2 simultaneous streams, plus service stream; with the secondary stream is variable based on the setup of the primary stream, there is text overlay of camera name, time, date, and customizable text. Video Encoding options include H.264 high, main, and baseline profiles; as well as MJPEG. There’s also Control Constant bit rate (CBR), constrained variable bit rate (CVBR) with configurable maximum value.
Other features include corridor mode, 8 configurable blanking windows, Pelco Smart Compression Technology, which lowers bandwidth and storage by up to 70 per cent. Audio streaming is bi-directional with input line in/line out terminal block and there’s G.711 encoding. There’s also an alarm input and an alarm output.

My first impressions of performance are strong colour rendition, high resolution, good contrast, low noise, low latency and low blur. Because the camera is designed for installation in cells and other relatively compact access-controlled spaces of up to 10m x 10m, I’m keeping Sarix Corner Mount inside for this test. Something I notice immediately is relatively strong barrel distortion – you expect this with a focal length of 1.8mm on a 1/2.8-inch sensor. But in corner-mount installations, this distortion is not going to be a huge deal. There’s a considerable focal sweet spot towards the centre of the frame, which is where most the action will be taking place.

Something else I notice is that the fixed 1.8mm lens gives excellent coverage of my internal scenes. I’m using thd detail throughout, I think reducing resolution would be a mistake – 3MP is as low as you’d want in a scene of 120 x 90 degrees, even if it is only 10m deep. A fixed lens like this has a compact hyperfocal distance – it seems to me it’s less than 20cm, but it might be smaller still – my mounting points are making it hard to get anything into the very near distance of the lens. I judge that I have detail more-or-less in focus from a few tens of centimetres to the garage door at 7.5m – the scene softens as you go deeper in but within my scene the camera offers decent digital zoom as well – I’m just using the mouse wheel and I can roll in 3-4 clicks and get the number of plate of the car in the garage with no drama.

I am doing my tweaking of settings via the camera browser – Sarix Corner-Mount is well-optioned when it comes to noise reduction, managing backlight and dialling in colour temperature. There are also plenty of options when it comes to setting up video streams – you can go as low at 1280 x 720 pixels for the primary stream, but this is probably going to over-spread pixels. The browser also gives good access to network settings, including SSL, FTP, Firewall and VMS connectivity.

Performance in low light levels is good, too. As light levels fall, noise increases but remains well controlled. In fact, I was waiting for the camera to go over with some impatience and it held on in colour and held on and held on, always retaining useful detail throughout the scene. The camera goes over into night mode cleanly without too much fuss and the IR array gives very good coverage – often IR will be focused in the centre of a scene but a camera like this needs to be different and the layout of the array with its 24 LEDs gives great balance across the scene.

With IR activated, images display good levels of contrast, which is what you want from monochrome images. As usual, monochrome IR performance gives much sharper edges than you see in colour. All camera engines battle to deliver clear tonal variations in colour as light fails. Sometimes it’s worth letting them hang on for dear life but often it’s better to encourage them to come across early using a timer or selecting a lighter transition.

Sarix IBD Corner-Mount is a specialised camera – it’s designed to resist physical attack, as well as incidental damage from dust or water. Monitoring of cells is the core function, but this camera would support broader applications – any compact harsh environment where you need to record everything all the time. In delivering this performance, what Sarix Corner-Mount clearly shows is how important viewing angle and height can be in certain applications, especially when combined with appropriate resolution, as it is here. For applications that demand complete coverage of an area – the specification argues 10m x 10m, but I think 8m x 8m is probably perfect – Pelco has really hit the mark.