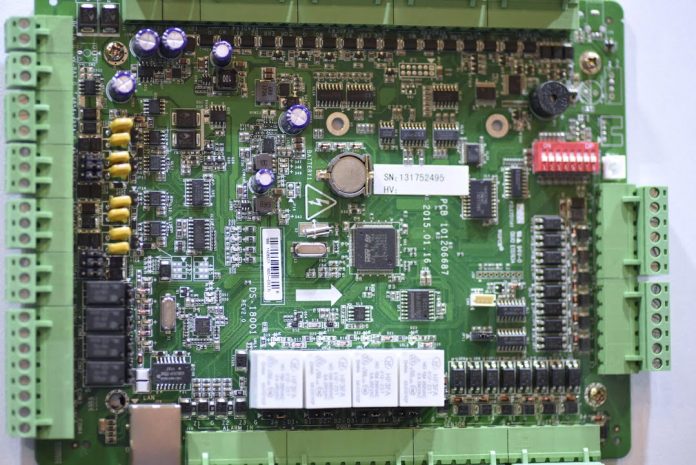 SEN got a run-through of the Qolsys IQ Panel 2 with Stanley El Komala, senior product manager, intrusion, BGWT recently. Someone described the Qolsys IQ Panel 2 as the ‘Swiss army knife of security solutions’ and that’s apt. This system has profound depth, especially when it comes to programming and then managing its surprisingly comprehensive specifications. The system straddles security and automation, with a full spread of dedicated security and life safety devices available, while the system also supports Z-Wave devices.

Although the panel can be addressed via the app and web interface – El Komala has notifications running on his Apple smart watch – we drive the system using the integrated controller/touchscreen user interface. Just for clarity, I’m going to describe this unit as the user interface from now on, even though it incorporates full controller functionalities, storage, comms and lots more.

This was an interesting demonstration – I wasn’t expecting to find a system that felt so familiar yet so advanced. Usually, it’s possible to nail the nature of a solution within the first 10 minutes or so but instead of first impressions, I got first, second, third and fourth impressions as El Komala peeled back layer upon layer of functionality. There were surprised bursts of laughter over some of the more unexpected features. A lot of thought has gone into Qolsys IQ Panel 2.

The physical specification of this system is impressive – at its heart, IQ Panel 2 is running a Qualcomm Snapdragon chipset and Google Android OS, and the backend is familiar and polished Alarm.com. The controller/user interface is slender, has a large 7-inch screen, high resolution of 1200 x 800 pixels and multi-gesture control. Something El Komala mentions that I don’t appreciate until later is that the user interface only displays options for attached devices and this streamlines system management.

This is a wireless system, so you’d expect the RF capability to be solid and it doesn’t disappoint. There are 6 wireless paths, including 4G LTE cellular (global roaming SIM), dual-band Wi-Fi 802.11 AC, encrypted security RF, Z-Wave Plus, Image Sensor and Bluetooth LE 4.0. Wireless means installation is flexible – you can locate the controller anywhere it suits your client. Because wireless communications are so important to the system, the user interface can display the quality of the wireless connection between device and panel in graphical form – it’s a very simply way of seeing how reliable device comms is likely to be during the installation process.

Neat features you don’t expect abound – user interface has a built in glassbreak sensor, built-in motion detection from the integrated 5MP camera capable of pairing with up to 5 devices, remote wireless firmware updates and a built-in router. There are 242 user codes, support for 119 Z-Wave Plus devices, support for 128 security devices using S-Line encrypted 319.5MHz, support for up to 80 locks, up to 6 thermostats, up to 6 garage doors and up to 10 outputs of your customer’s choice. There are 2 hardwired zones, 8GB of flash memory onboard, a microSD slot, 2 x 1W speakers, stereo microphones, internal piezo siren, tamper switch, 3200aH Lithium polymer battery, wall or table mount, custom chimes, emergency/panic function, 4-day weather app, Bluetooth touchless disarming for 5 devices, photo frame function.

As El Komala tweaks the demo system I notice there’s voice support to assist installers with programming. Something else I notice is the depth of programming. It’s instructive that I take more than 100 photographs of the system during the demo, around 50 per cent of them are of different user interface screens, despite the fact there are so many devices to play with.

According to El Komala, Qolsys IQ Panel 2’s wireless options expand installation possibilities – which setup you go for really depends on the requirements and communications platforms covered by a customer. He also points out that arriving later in the year will be a Power G wireless module, which will be an upgrade to the IQ Panel 2. PowerG is added to an existing slot, so there’s no need to change the controller to enhance capabilities.

“Support for Z-Wave is a real strength and the system supports smart switches, as well as being able to control air conditioning using an IR communication device which addresses split systems directly and gives full functionality. There’s a wireless repeater for larger applications and there are cameras, compatible locks, Skybell intercoms, smart light bulbs and more Z-Wave devices. Programming of these devices with IQ Panel 2 is second to none.”

The heart of the system is the user interface, which gives you situational awareness of system status visually, as well as by voice and tone alerts. And of course, you can set up notifications to give granular reporting of any event that takes place in real time via the app, with reports arriving by cellular and Wi-Fi simultaneously. The app is another strong interface, giving full control, as well as a detailed event history. You can hop into status and see instantly the state of all system devices – name, status, battery, history.

But the user interface is the star of this show. One of the great things about modern alarm and automation solutions isn’t just their expanded capabilities but the ease of accessing capabilities that have always been there but could never be used to their full potential. Features that were set up once by the installer during commissioning and locked in stone can now be tweaked on the fly by users – that includes useful things like device or area bypassing – and all this facilitated by a very simple user interface, which allows you to simply check the devices you want to leave out.

Functionality like this is supported with plain English feedback from the controller, which ensures you’re never in the dark about system settings. Panel communication levels are exceptional, with visual and audio feedback at every turn. Even the arming countdown is displayed as an icon, leaving users in no doubt where they stand in relation to operational commands. Supporting ease of use are 14 separate video tutorials that show you how to handle every aspect of the system – lights, locks, weather, photo frame, system tests, camera, energy management and lots more. As El Komala points out, you don’t have to know how to programme the system before you start installing IQ Panel 2 but you’ll have learned by the time you finish.

The functionality is icon-based, and it’s layered. At the top are more general things like Z-Wave status, activity monitor, interface status, automation. You dip down through advanced settings to reach user management, system tests, panel re-boot, edit sensors, power down, sound and Bluetooth device management. You open the system page to access cellular, Wi-Fi, Z-Wave, Ethernet and internal storage and then tap each to access the detail underneath. In the case of cellular, the dropdown displays carrier, cellular connection, cellular signal strength, IMEI, etc.

“Enrolling Bluetooth devices is a simple process of Bluetooth pairing – you touch pair on phone and user interface, the device in enrolled and the system confirms success – you can pair up to 5 mobile phones,” says El Komala. “It’s not like geo-fencing, which works at greater distance but once you arrive at home the system will sense your device and disarm, making getting in and out of the home easier. The system can also secure via Bluetooth or it can be programmed to secure itself by closing garage doors, locking door locks, then arming automatically at local sunrise and sunset.”

Installing Z-Wave and security devices is simple, too. The sensor requests it be added to the sensor list and you simply OK this. The next page shows you the comms type – in this case it’s SecurityRF-433 – you can nominate sensor type, tweak delays, name the sensor, nominate chime types if applicable, enable voice prompts and more. Managing sensors is just as easy.

“Programming and managing all these sensors is handled using swipe gestures,” El Komala explains. “You already use these gestures to drive Android or iOS applications, so it’s intuitive to find the same thing in this user interface.”

Something I’m especially enamoured with is the fact this IQ Panel 2 incorporates a split system air conditioning control device. The way this works is that an IR repeater is located facing the system that is addressed directly by the user interface or app. It’s not just on/off, either. The device, which costs around $150, lets users control their air conditioning mode – heat, cool, or auto. The system communicates with the repeater via Z-Wave and the repeater communicates with the air conditioning system using IR. It’s a simple and elegant way to handle a piece of automation that used to demand hard wiring.

As well as air conditioning, Qolsys IQ Panel 2 can manage smart light bulbs, light dimmers, as well as the Skybell wireless video intercom. This brushed stainless unit communicates events and video footage directly to the user interface, allowing homeowners to answer the door, communicate with the visitor via audio while confirming identity with video, then open the door to allow access. Rather cool, the Skybell has integrated motion sensing along with a camera, microphone and speaker. Skybell can alert the home owner to the presence of a person outside the front door, whether they press the doorbell or not, which is a nice safety feature.

The ability to drive wireless Yale bolt locks enhances the system’s capabilities considerably. These locks include an integrated backlit keypad, so they can be opened with a code and it’s possible to lock all locks in the system or unlock all locks simultaneously. The same applies to garage door closers, which work with any standard tilting door. Video is a key element of the user interface and it’s well provided for. Cameras are displayed in a list and you select one to see the camera view. Video of events is also available via the Alarm.com app where it’s saved and displayed in the form of a list.

“One of the great strengths of this system is the ability to support a very large number of devices, while allowing complex functionalities and giving users considerable detail for drilling down,” El Komala says. “And it’s very well supported by Alarm.com with the latest comprehensive app, as well as detailed browser interface.”

Qolsys IQ Panel 2 is right up at the top of the list when it comes to the latest and greatest security and automation solutions. It’s not just that there’s a huge number of devices supported and multifarious comms paths. There’s also enormous power in the user interface and it’s all accessible power – you’re not doing Bletchley Park with a code book in one hand and a rotor in the other, when it comes to programming and managing the system. Instead, everything is seamless, accessible to the point of being obvious, while the system communicates with you every step of the way.

Features of the Qolsys IQ Panel 2 include:

* 2 hardwired zones, 8GB of flash memory onboard, a microSD slot