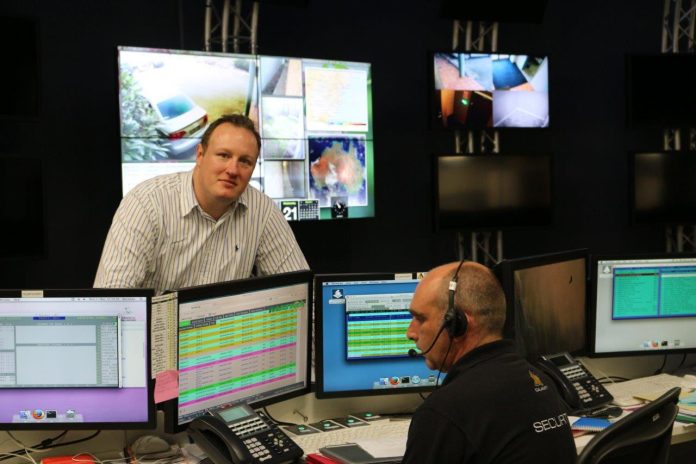 For installers contemplating monitoring solutions the choice of wireless, hardwired and hybrid communications paths can be a confusing one. But if anyone knows which comms technologies work best, it’s the monitoring station owners themselves.

MONITORING centres are in the hot seat. They support tens of thousands of customers across a diverse range of communications technologies and their experiences give them a unique insight into what works best for clients in the rough and tumble of the real world. Monitoring solution providers, too, have deep experience in negotiating the varying gauges of the global communications network – their input is also valuable.

At Calamity Monitoring, Daniel Lewkovitz says the best monitoring comms paths to ensure high security are a combination of wireless and cabled internet.

“From a security standpoint, given the choice I would normally recommend a combination of wired and wireless so each path can compensate for the potential weakness of the other,” Lewkovitz says. “Wired connections such as PSTN phone line, ADSL or cable internet can be cut or suffer occasional ISP outages. Wireless connections such as GPRS Mobile are susceptible to jamming or simply unreliable network strength. Put the 2 together and there's a much higher level of network availability.”

Lewkovitz says that as well as the network pathway it is important for end-users to consider an appropriate service level for their monitoring.

“For example, the polling frequency dictated by AS2201.5 and the grading of their monitoring provider,” he explains. “The whole system needs to be evaluated from end-to-end. There's little point in having a high security alarm connected to an A1 Graded monitoring centre where the phone line can be cut with a pair of scissors. Conversely, an alarm with a well-secured Ethernet and GPRS-polled IP monitoring system reporting back to an ungraded cowboy operation is no good either.”

Lewkovitz says in his experience a wireless primary monitoring connection does not offer 100 per cent uptime.

“Absolutely not,” he says. “Network carriers would only be brave enough to commit to 99.95 per cent availability. However, I'm being a little pedantic as individual outages may only be seconds in length and spaced apart, meaning no significant exposure for the monitored site.

“In any case, the poll-rate of a site (how often the system sends an OK handshake) varies depending on risk. Traditional dialler alarms connected via PSTN might send a daily test signal (i.e. 24hr poll) and more security-conscious sites may be polling every 120 seconds or less. So there is a built-in margin for failure within tolerable limits.

“Having said that, if a site is being jammed or goes offline, the absence of polling should indicate a problem to the monitoring provider in the same way a panel being sabotaged would be identified by a poll-fail. Or that's the theory.

“In practice many monitoring centres and end-users are still coming to terms with how to respond to poll failures. The response can be anywhere from ‘the system is being attacked, let's roll’ to ‘the network's gone down again, don't worry about it’ depending on who you ask.”

Lewkovitz says that older monitoring operators will recall Securitel not having some of these headaches.

“If a site went down and Telstra or the end-user weren't aware of the issue, it was a big deal. Today, an outage could easily be a number of more mundane faults,” he says. “Nevertheless, IP monitoring technology is so much better than PSTN it's absolutely worthwhile.”

Should installers insist that wireless is always be supported by wired communications technology – either dialler or IP?

“Despite this being my preference, you don't always have the option,” Lewkovitz says. “A growing number of sites do not have access to wired internet or telephony services. We recommend against PSTN dialler as the sole monitoring path as it is trivially defeated and faces obsolescence with the NBN rollout.

“My general recommendation is for some redundancy so if wired and wireless aren't both available, for a wireless-only path e.g. a dual-SIM approach. If the primary carrier becomes unavailable (network outage, cell tower congestion), the device can fall-back to a secondary network. These are quite reliable albeit slightly more costly and still susceptible to GSM jamming – which is illegal in Australia but readily purchased online.

“Regarding a PSTN connection as backup, I would normally tell people to get rid of their phone line if they don't use it,” Lewkovitz says. “A number of commercial premises with modern telephony have a PSTN phone line connected for nothing except their alarm system. That's $40 or more a month they could be spending elsewhere.”

“Even if the networks can handle it, I'm not yet convinced all the installers can,” says Lewkovitz. “While a $200 DVR purchased on eBay can readily connect to your iPhone, connecting video back to monitoring centres seems to be way too hard for many installers in the security industry.

“Calamity monitors live video at a growing number of sites. The majority of these sites are connected via an on-site internet connection, which should be quick but even that can struggle when people attempt to send full-motion HD video to us just because their cameras can. There needs to be a bit of communication between the installer and the monitoring centre,” says Lewkovitz.

“Save the high-def for on-site. Remember, we don't need to see the whites of their eyes, view all 200 cameras or read the number-plates. We just need to determine '2 legs or 4' and 'what are they doing?' in the vicinity of an alarm activation, so lower resolution is perfectly adequate.”

According to Lewkovitz, for that reason a number of video verification systems can happily operate solely over mobile data networks.

For Security Communications Solutions’ Dale Acott, there should be a minimum of 2 comms paths reporting to the central monitoring station at all times.

According to Acott, no single mobile network provider can give 100 per cent up time and he says only a combination of 3G wireless connections can achieve this.

“For this reason, SCSI choose both Telstra Next G and Optus 3G to communicate to the central monitoring station via the DirectWireless private alarm transmission network,” he says.

Should wireless always be supported by wired technology – either dialler or IP?

“This really depends on site requirements but the short answer is no,” Acott says. “A combination of 2 wireless 3G paths will be an extremely reliable solution. In saying that, if the site is equipped with wired IP then it is a smart option to utilize it as it offers another path at little or no expense.”

“But there is not much hope in achieving video verification on GPRS as these days it is not supported to handle tiny alarm signals let alone video.” 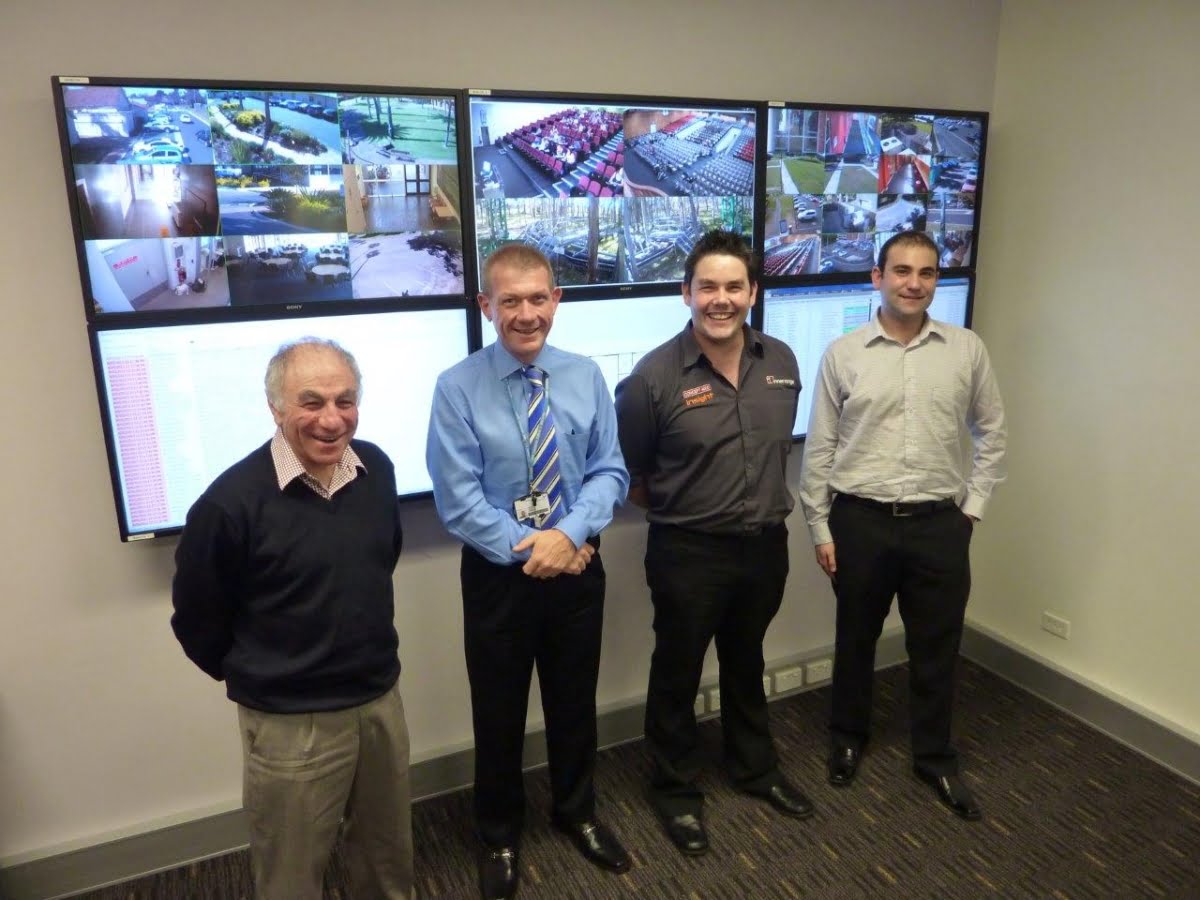 Lee Chua (centre front) with part of his team

Over at bureau monitoring specialist, BENS, Lee Chua says his team discourages the use of mobile networks as the primary connection to the monitoring centre. Instead, BENS recommends 2 different comms paths supporting each other.

“Over the many years we have discovered that mobile networks do not transfer DTMF signals over voice channels efficiently or accurately,” he explains. “Voice channels are meant for voice communications and humans can guess missing transmissions of a few milliseconds and still make out a word.

“Alarm receivers, however, do not have that capability. Most alarm panels transmit with a cadence of 50ms (tone on/off). This means a drop off of even 10ms can make that tone undecipherable – it will be treated as noise and rejected – DTMF signal discarded.”

According to Chua, the BENS team suspects that for voice encoding, mobile networks use lossy encoding techniques knowing the adeptness of humans.

“We have also recently seen 'dtmf-data' communications using voice channels seem to be suffering more from missing tones,” he says. “We guess that this may be because service providers are allocating more air time slices to data channels as more and more users are using data communications on their (smart) phones.”

Chua says that from the point of view of a monitoring centre the consequences of missing tones include repeat transmissions that hog receivers. It’s such a problem he says BENS will be quarantining all panels that use mobile networks as their primary communication channel to a receiver reserved specifically for it so there’s no effect on other panels using traditional communication media.

“As well as repeat transmissions, we have found communications morph from one protocol to the next,” he explains. “Ademco is a very archaic and loose protocol. The difference between one format and the next is the size of the transmission; so a Contact ID (of 15 tones) can at times morph to 4+2 (6 tones), etc. We have seen some really strange morphs.

“For instance, communications can jump client IDs. We have had events that we have traced from the caller ID in order to show that this was indeed happening. We are taking steps to solve this problem besides discouraging the use of wireless as a primary.” 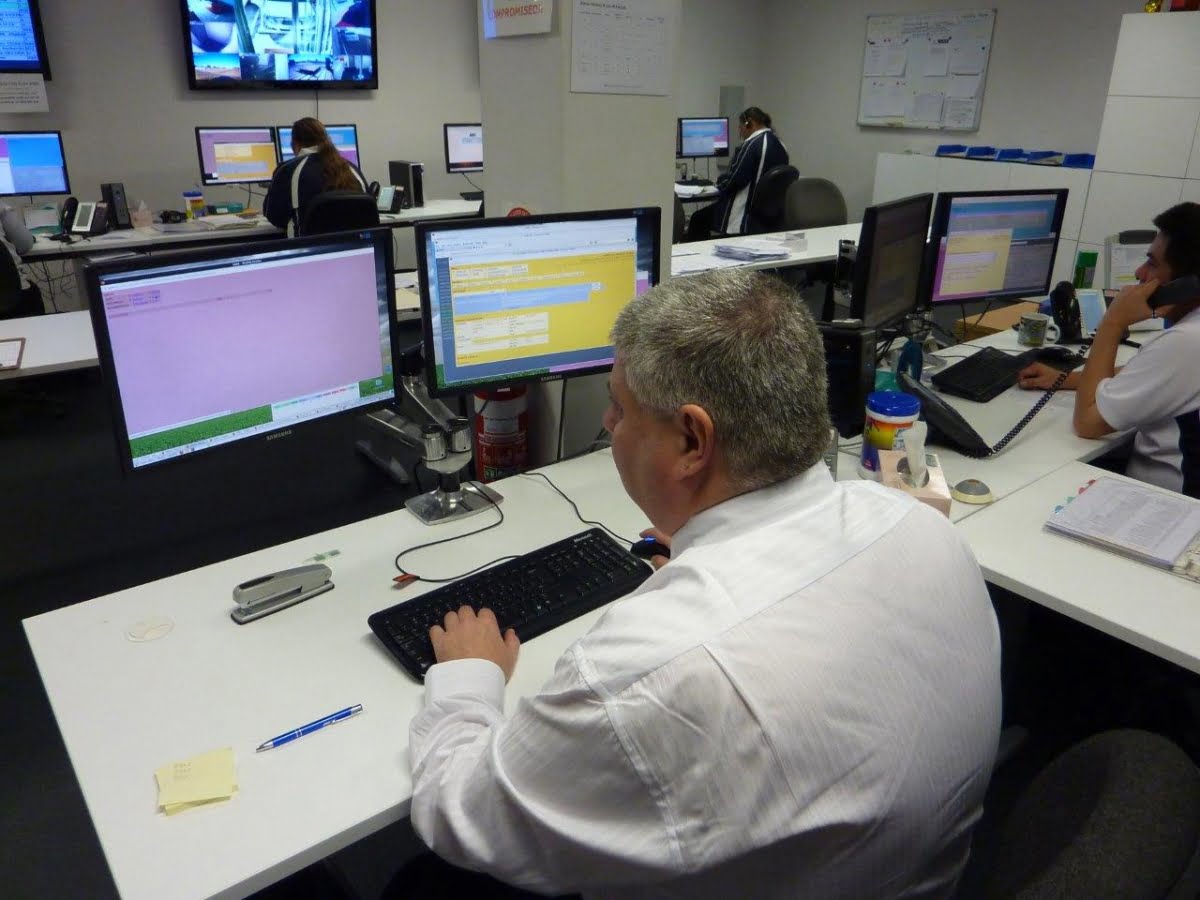 Dallas Whittaker at the controls

“Answers are not always black & white and the conscientious security professional must delve deeper to gain a true understanding of the benefits and risks of IP communication for security applications,” he explains.

“The days of relying on the public switched telephone network (PSTN) for security applications are becoming rarer. Today, we are faced with new considerations, many of which most monitoring centres or alarm installers have never previously had to consider. These include quality of service, service level agreements, contention ratio’s, bandwidth, national round trip times, public versus private networks, network availability, packet loss ratio, network jitter, encryption and the list goes on.

“An end-to-end managed service is the best way to ensure reliability, service continuity and security in today’s world of IP communication. Although no single path or combination of paths will ever be perfect, each path on its own or in combination has the potential to perform its core function. But, there is far too much reliance on a set and forget mentality and there is simply no place for it in today’s ever evolving environment.”

Kavanagh says securing data sent through the transmission system requires an holistic approach as not one method is effective alone.

“However, there are multiple facets to security across IP, all of which need to be considered and addressed,” he explains. “They include security of information from the alarm system, security of the network and security at the termination point within the monitoring centre.

“Furthermore, network and service support is greatly understated when it comes to IP alarm communication. The security industry operates mission critical 24×7,” he says. “This means it’s vital that the products and services installers sell are supported during these times. You would be surprised how many service providers only operate between the hours of 9am to 5pm, or provide a mobile phone contact number for after hours.

“A major concern for me is the number of IP products/solutions focusing on multiple path alarm delivery from the client premises, yet delivering to the monitoring centre on a single path,” he says.

“In the majority of cases it’s a single Ethernet link. This is a major risk factor and a serious step backwards from the current options for PSTN diallers which use 1345/1300 services with multiple fixed/wireless paths to receive alarms at the monitoring centre.”