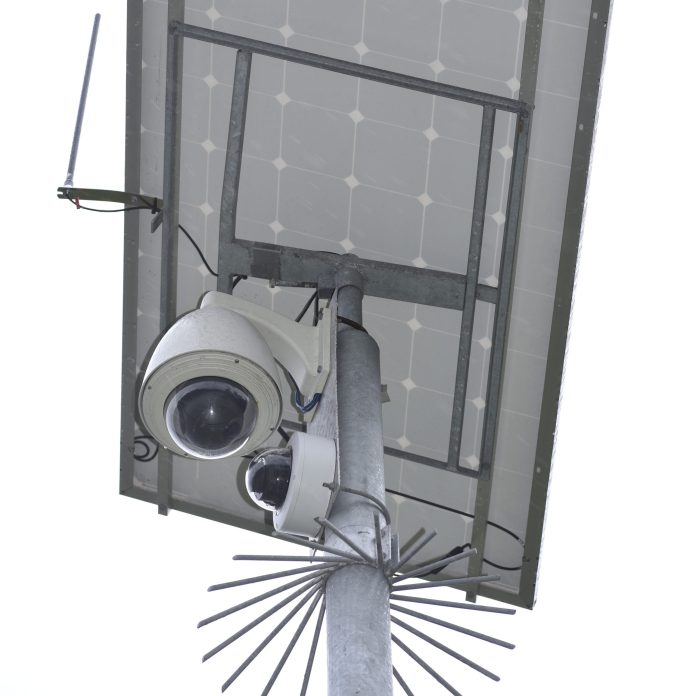 3 Crowns Technologies has built Transport Roads and Maritime NSW a cloud-based video surveillance solution that leverages the analytics in Sony cameras to automate the process of detecting and actioning watercraft speeding and reckless riding events on the Georges River in Sydney.

ON the Georges River at Picnic Point in Sydney 3 Crowns Technologies has delivered Transport Roads and Maritime NSW a customised solar-powered version of its SecureGO platform in the form of 2 independent Waterway Enforcement Camera systems integrated and managed in a cloud backend. Each unit leverages Telstra’s 4GX wireless network, Envirocoms management software and the analytics capabilities of Sony CCTV cameras, as well as integrating with Milestone’s XProtect VMS.

There are 2 pole-mounted camera clusters installed along the river – one at Revesby Beach and the other at Picnic Point – a third will be installed soon. According to Transport NSW, the cameras keep a constant lookout during daylight hours to help water police and NSW Roads and Maritime Service patrols detect watercraft speeding or reckless riding along the river. The speed limit along the river was lowered last year to 8 knots and riders caught speeding could face fines, have their licence cancelled or jet ski confiscated.

“Authorised officers will review the recorded camera images and footage to determine if an offence has been committed and an infringement or warning notice or court attendance notice can then be issued,” a Transport NSW spokeswoman said, before the Waterway Enforcement Cameras went operational.

3 Crowns Technologies has been working on its SecureGO solution for some time. At its heart is EnviroCOMS technology that has been proven over many years in environmental and industrial applications where it has been used for monitoring water flows and the measuring the stress on railway bridges. The flexible nature of the EnviroCOMS platform makes it ideal for an applications like RMS.

“The Environmental Data Management System EDMS (Envirocoms) component and the Milestone Video Management System (SecureGO) are interoperable, and we are the first company in Australia to offer this level of interoperability for these sorts of applications. We’ve been able to offer this functionality in the past for specialised applications but today we are seeing wider applications – whether it be something like this RMS solution for monitoring speeding boats or jet skis, or for monitoring smart cities, or bridges.

“The EDMS platform can control the VMS platform and decide based on events when it wants to get imagery. The thing about the RMS enforcement cameras is that we are using the analytics in the Sony cameras, so we are empowering the analytics/meta data generated by the cameras. There are 2 cameras in each installation – one is a Sony Gen 6 PTZ, which does the video analysis and can be controlled remotely via the Milestone VMS and the other is a Sony SNC772 4K camera.”

According to Lane, having a capable network is important in a challenging environment for wireless like a river valley.

“A year ago we could only get half a meg out of the remote site but now the site gets 10Mbps on Telstra 4GX, which uses the 700MHz range and gives us the potential to stream full HD from a single SIM with no NVR,” he explains. “This performance potential will increase in the future as 5G comes on line. That single camera gathers 2-3 terabytes of data every month which is recorded in real time to the cloud 25fps and 1080p or 4k.

“The static camera is a Sony SNC-VB772 running in evidence mode, which is higher than 4K – the resolution is 5100 x 3000 pixels and that camera is not recording video but it’s collecting a series of evidence shots – you need very high resolution to get the registration numbers of fast-moving watercraft, such as jetskis. Because it’s solar, the sites are completely autonomous and run from sun-rise to sunset.

“If we take a look at the RMS system you can see that when a jetski goes through their angle of view we use the analytics within the camera to calculate speed by timing the vessel between multiple points in the scene,” Lane explains.

According to Lane, the system allows all sorts of parameters to be used for searches – it might be reckless riding or launching a boat dangerously – the parameter depends on the application. Events can be dealt with when the system is in adjudication mode – video is extracted automatically from Milestone, speeding information is overlaid based on measurement between multiple points, and a security indicator is created before booking or warnings.

Next, Lane logs into the Envirocoms platform on his laptop to show me how the over-arching system works. Given the power of SecureGO, it’s surprising how simple everything looks.

“With the RMS application, Envirocoms is handling all the imagery, the video is coming through via Milestone XProtect Corporate and important for the end user, those 2 systems talk to each other. Envirocoms has an image overlay which also counts the boats and it feeds video to Milestone as required for viewing by operators.

“Something else that benefits RMS is that the Envirocoms system is encrypted with secure indicators just as traffic cameras are encrypted,” Lane says. “If RMS chooses to issue a ticket, the images meet the protocols required for speeding fines on the road. That level of encryption is above and beyond anything from a VMS solution – adding security indicators is another standard.”

Lane also shows me the Envirocoms IoT platform back end on his laptop – from this point of view, all 3 Crowns’ IoT customers are represented and Lane can duck in and out of the system, visiting sites, viewing footage and checking event reports and system status. According to Lane, this IoT platform is not like any of the toy IoT solutions we’ve seen in the past. Envirocoms is industrial strength – it gathers information from bridges as trains cross them, or counts electric cars visiting a charging station.

“But it’s more than an IoT platform,” he explains. “It also does manual data entry, IoT, data loggers and it’s integrated to VMS platforms, so the system works with video and imagery. In this case we are using some dashboard functionality to manage the boat counting. We can also put things like weather graphs in the dashboard to increase situational awareness. And down here at the bottom of the screen we have extra plug-ins – an image viewer, a screening process and a compliance process. This is for law enforcement – RMS can screen who is speeding and put together a package of images and other data when sending out warnings or fines.”

You hear about IoT but it’s hard to appreciate the broadness of its capability until you see a real application like this one. The SecureGO platform is 4GX mobile capable, the IOT video solutions incorporate data analysis, alarms, rules, the system is plug and play and it integrates with Milestone XProtect, as well as more than 6000 camera models over a highly secure private Layer 2 network.

In this RMS application the resolution is extremely good – there’s court admissible recognition with the Sony SNC772 fixed dome – you can zoom in digitally and glean more detail with 4K. The image quality is exceptional – there’s no question about getting the rego numbers of boats and jet skis. They are always available. Best of all, there’s a huge amount of capability at the fingertips of management and authorised system operators and its available from a workstation, a remote laptop and even a mobile device.